As anyone who has been to Japan knows, the seafood in Japan is some of the freshest in the world. Since it is now January and the New Year, I wanted to bring back some of my favourite memories from the place in Japan that I associate most with Christmas, good Japanese food and snow. No seafood will be as fresh as that caught in the glacial waters near Sapporo and sold that same day at the Sapporo Fish Market. Even though we were not going to be spending more than two days in the capital of the Japanese northmost island, a visit to this legendary market was worth braving the freezing temperatures and the mountains of snow piled outside our hotel. As the market is located slightly further away from where we were staying, we got a taxi there, which only took us about 15 minutes.

Everything had been covered in even more snow overnight and the snow covered all the roads like a white sheet, making everything around us white and pristine. 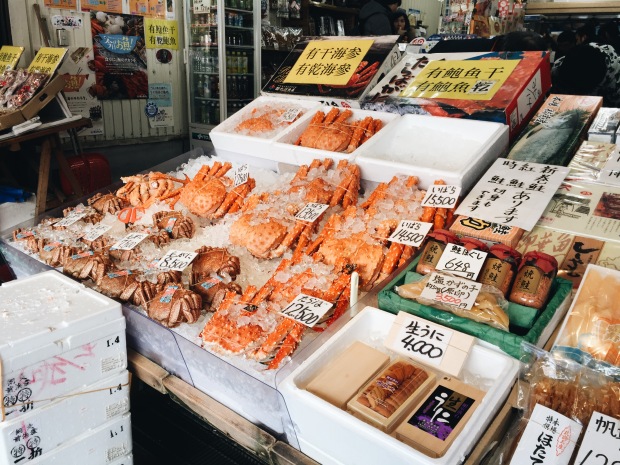 As soon as we arrived at the market, we were hit with the dazzling array of tightly strapped-up spiny and hairy crabs the size of our heads, or at times- even bigger. Every inch of the displays was covered in seafood, fish products and farm produce, making for a truly remarkable sight. In Hokkaido, nothing beats the crabs, and it is them that are the main attraction of the whole market, standing out like large red jewels hidden in the ice boxes.

Boxes and boxes and boxes of them. Each crab is caught on the day and the varieties differ, with the Tarabagani crabs further back having more meat on the legs, making them perfect to eat on their own as the prized feature of hot pots, while the Kegani horsehair crab at the front being sweeter and having better ‘crab miso’.  Each can be grilled and cut up into little pieces in front of you, as the majority of the stalls have their own grilling and seating areas at the back.

Although the stalls are mostly comprised of fish and seafood, there were also many stalls with a variety of local fruits, vegetables and dried snacks which were all very colourful and piles up in mountains overflowing each box. On the left here in the photo above you can see the huge red apples that are most probably from Aomori, the apple central of Japan, as well as the Hokkaido pumpkin, which has the characteristic green skin and flavourful bright orange flesh. The beautifully dried persimmons next to the apples might look strange, as they are covered with a fine white mould, but they are exceedingly delicious and take on a figgy, marmalade flavour that makes them a perfect snack in the winter and full of natural Vitamin C. 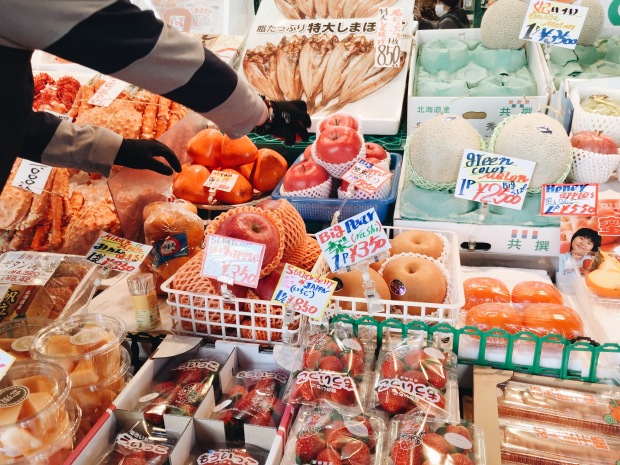 This seemed quite funny to me- on the left-hand side, you have the largest tarabagani crabs, while right next to it on the right-hand side of the divider, persimmons, multiple melons, apples and strawberries, posing the fruits of the sea and the land at a very close proximity to each other. Everything looks super-sized and picture perfect, as splicing and creating the best natural varieties of each fruit and vegetable has become an art form in Japan, with huge melons, white strawberries and yuzu fruit the size of grapefruit being casually sold in supermarkets. While vegetables remain an essential part of the everyday diet for the Japanese, fruit is mostly considered a prized dessert, with less focus on quantity and more on the quality of the fruit served, showcasing it like the British showcase a trifle at the end of the meal.

Shellfish are also incredibly popular, with some shellfish, like the little brown clams being used in a morning miso and the oysters further back being served on their own as a briny starter. Better yet, get one of the scallops opened right in front of you at the market, placed on a grill and doused in butter and soy sauce before being handed to you still steaming in its shell with a ‘sugar centre’ (sort of like a rare steak).

This was a view from the grilling area, where you can see the scallops still alive in their shells placed all together in baskets in the water. Yep, that tarabagani crab being cut up was all ours…

This was just a better shot of the tarabagani in all of their red spiny glory, with a more detailed shot of the smaller hairy crab too, with the visible long spines on its shell. Both are delicious, so if you do get a chance to go to the market, make sure you try both, especially if you are dying to try something more umami-filled, like the crab miso.

This small restaurant had the most amazing plastic display of food we had seen around the whole market, and it had a closed off restaurant, which also meant heating! Nothing better than trying some of the amazing market wares on a hot bed of rice with miso. 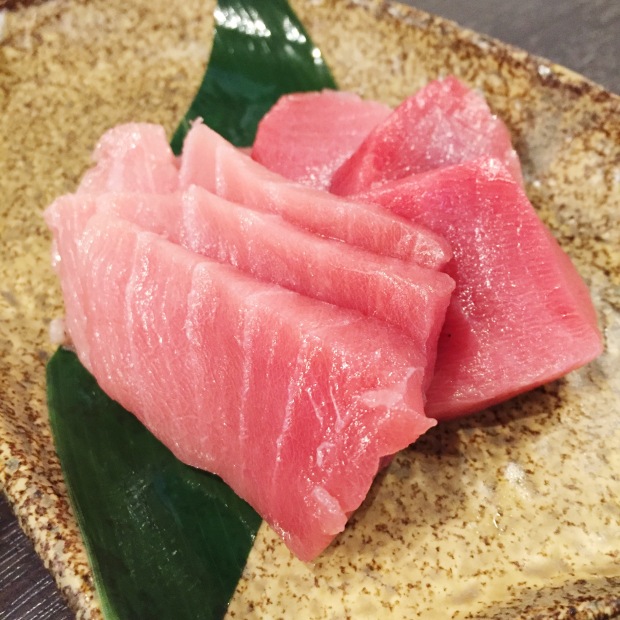 This little platter of toro (fatty tuna) sashimi was a bright pink ombre colour, with one side fading almost into white. It melted in the mouth and had a pleasant lightness to it that didn’t get sickly, as some tuna does.

This was my bowl of delicious seafood, with ikura (salmon roe), tarabagani and kegani crab and enormous scallops on a bed of vinegared rice. Ikura for me is sometimes too strong which is why I don’t really have it very often when I am in Japan, but here it was delicious and smooth, without any saltiness to it. The tarabagani flesh was very meaty and light, perfect for a hot pot. The kegani was much more flavourful, so if you are only impressed by the size of the tarabagani, give this smaller crab a try first- you might just prefer it! The scallops are always good in Japan so it was no surprise that they were thick and sweet here too.

This was my boyfriend’s bowl, which was pretty much the same as mine, except he got beautiful fatty salmon and some uni (sea urchin) to his. He said it was delicious and actually wanted another bowl after he finished this one!

This is what you get in a full set- the bowl of seafood on rice, a small bowl of miso with baby clams, a little bowl of fresh wasabi to add a delicious kick to the seafood (especially good for the fattier fish in your bowl like tuna and salmon) and a small plate for soy sauce to dip your topping into if you prefer not to soak the rice.

The restaurant had many signatures of celebrities and tv personalities in Japan. If you have ever watched any food shows on Japanese TV that follow people around asking them what they have to eat, or the famous ‘Can I eat your dinner?’ segment, you may have seen celebrities not only dining at restaurants like these but also going into people’s houses to have dinner with their families. These segments are not planned with the families beforehand as the celebrities literally go knocking door-to-door, but anyone rarely refuses which gives a tourist like me a rare look into what real Japanese families eat on a daily basis!

Usually, restaurants are very proud if they have appeared on food shows or if anyone famous has dined with them and they stick signatures or stills from the shows on their walls, especially if they are family-run. This place seemed very popular!

The restaurant was very cosy inside, with many locals and tourists coming in for their lunch meal. The set options and the variety of seafood toppings if probably what attracted both crowds to this popular spot.

We walked around a bit afterwards, exploring Sapporo after getting very full on the delicious wares from the market. Sapporo has a lot of covered walkways and nice parks, so if you have got shoes with good grip or if you purchase some of the snow spikes for your shoes you really can spend hours outside exploring the area.

Since it is snowing so much in Durham right now, it really is nice to reminisce about the wonderful time we had in Sapporo and those extravagant seafood displays from the Sapporo Market. If you want to see more photos from our stay, do follow me on Instagram under my handle @_stylion_.

Have your own say Cancel reply

Welcome to my site. My name is Zofia, I have recently finished my MA at Central Saint Martins in London, UK. I started this site in 2011, and I have been writing about fashion, culture and food ever since. I love new and exciting trends, mesmerising locations and exacting attention to detail and artistic finesse.

There was an error retrieving images from Instagram. An attempt will be remade in a few minutes.