The year does not truly start until September- the autumn leaves bring in new prospects and books, expositions, the beginnings of Doctor Who and that first cup of steaming tea when it’s freezing outside. It’s also the time for a change- in particular for new starts, as it was for me, with leaving the metropolitan lifestyle behind and entering a slower pace in Durham where I can’t get around on the Tube. The move to the countryside of dales and moors is in order- away from the smoky grey bustle of London.

Just to get that last bit of culture pumped into my mind I decided it may not be too late for an art show- and nowhere is better than the V&A, where fashion meets art and culture in a combustible mix. The photo exposition of ‘Horst: Photographer of Style’ was particularly fascinating- his vision in technicolor was even more startling than his more famous monochromatic works. In these, he plays with shadow and lighting to create dramatic effects which bring to mind the classical sculptures of ancient Greece. Interested in studying the columnar architecture and the marble statues that looked dignified and poised, he studied the shapes and angles and took it as inspiration for his own work.

Particularly focused on draping the clothing around the body, his work evokes a different era, something that may even have seemed escapist at the time when the rest of the world was in chaos with the war. He brought the Parisian fashion alive with dramatic shapes and sultry eyes turned towards the camera. While others looked to the pages of Vogue for inspiration and otherworldliness, the man was behind the camera coming up with new ways to dazzle his audience. There is a definite sense of magic when you look at his photographs- he works well at outlining the defined lines that make the photo seem like an artwork. His connections to Vogue did not elude me- it was with the famous fashion house that Horst really grew into the photographer that many now aspire to be. 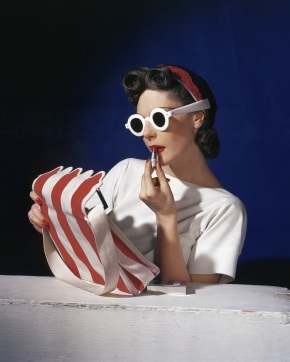 Strangely enough, his focus strayed from fashion- maybe he got tired of just showing beautiful women in elongated poses with doe-like eyes for commission! He loved to travel- the focus on symmetry in nature and his surroundings were also captured in startling chiaroscuro in black and white, from seashells to Fibonacci sequences in plant macro’s. Nothing escaped him- from the movement of the neck when a woman turned in her corset to the attention he paid to nature, historical artefacts and interiors. 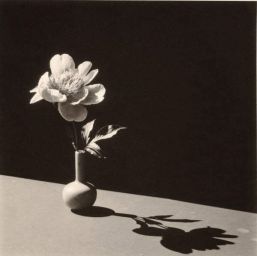 In particular he liked to look into the houses of his glitterati- you see shots from the rooms of Baroness Rothschild and the gardens of Yves Saint Laurent, both of which he shot in colour, showing the beautiful colors of the carpets and divans set out on the viewing platform in the gardens and the delicate bamboo frame in the bedroom of the Baroness. These photographs show just how much people liked to travel and collect pieces from their exotic ventures- some items were from the Orient, others from Africa and classical Europe. 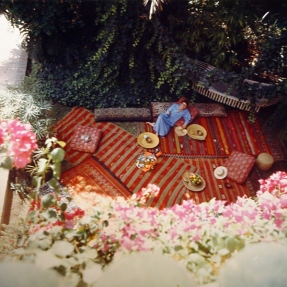 At the time when he began shooting for magazines modelling still was not a profession- fashion magazines had to look elsewhere for their beautiful faces that had to stand out in the detailed shots that were an elemental part of the magazine. That is why many of the models were famous aristocrats, who knew the people working for the magazine and would turn up so that they could get their face shown on the international market as the face of high fashion. Many nowadays would not approve of this order, however, magazines would usually have trouble funding every one of their models and it was easier to rely on beautiful form in this way. However, this era also gave rise to the pursuit of new faces- in particular, one that Horst shot in 1946, Carmen Dell’Orefice, when he was completing his photographs from nature in his book ‘Patterns of Nature‘. 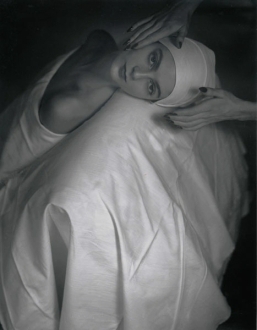 From his avant-garde expression when it came to the body to his vivid studies of colour in Vogue, the Horst exhibition leaves nothing to hide. His work is exemplary and the V&A have taken their time in putting together his most revered work. In his own words,“I like taking photographs because I like life,” he once said. “And I love photographing people best of all because most of all I love humanity.”

Writer, creative and explorer of all things Japan. Central Saint Martins graduate and fashion journalist for 1 Granary and Lampoon Magazine. Writing about all things fashion – from fashion weeks, food and technology to fake influencers, art exhibitions and cultures around the world.

Yes, the images were beautiful! The Horst exhibition was truly wonderful, and I would love to see the wedding exhibition too- perhaps when I am back in London. I’m glad you enjoyed the post!

Great post and love the images – I have the Vogue Postcards which obviously have some of the images. Have a nice day.

ZOSIA, I AM TEACHING PANIE TERESA EVERY THURSDAY IN SAKSA KEMPA CAFÉ. SHE IS VERY NICE AND INTELLIGENT. CHEERS SEE THE NEW REMBRANDT EXHIBITION IN THE NATIONAL GALLERY AND ANSELM KEIFFER,S RETRO IN ROYAL COLLEGE OF ART. FORGET FRIEZE ART FESTIVAL BUT PAN DESIGN SHOW IS GOOD

LIFE IS SHORT–KEEP AWAKE FOR IT RICHARD BOULEZ

Have your own say Cancel reply